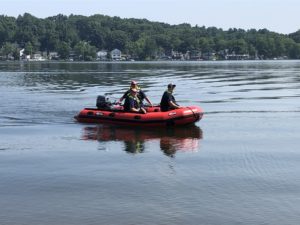 Approximately 4.7 percent of city’s area is covered by water. Within the city limits are four large lakes, known as Lake Williams, the Millham Reservoir, (both are backup water supplies for the city of Marlborough), the Sudbury Reservoir on the Marlborough/Southborough border (a part of the MWRA Reservoir system) and the Fort Meadow Reservoir on the Marlborough/Hudson border. Fort Meadow is manmade lake, originally created to provide water power for the mills in Maynard. Fort Meadow is now a recreational lake, with city and /town-owned beaches and a few small private beaches. The Assabet River cuts through the city, and there are also numerous brooks and small ponds in the city.

While boating and recreation is only allowed on Fort Meadow and the Assabet River, there have been instances of people trespassing on the other reservoirs to fish and swim.
According to Assistant Fire Chief Jeff Gogan, “This new boat offers a much safer platform for firefighters to work off of than our old boat. It has a rigid floor, can hold up to eight people and is very stable. Not only can it be used for water rescues, it can be loaded with hose and a floating pump to put out fires on boats and on small islands on the MWRA property. The boat is extremely portable and can be carried easily. It also has wheels that can be attached to male transport down a trail easy.”

The MFD has been conducting ongoing training at the Fort Meadow Reservoir on the operations of the new boat. It is quartered at the Fire Headquarters, and kept in a ready state for rapid response in an emergency. In addition to the new boat, all new personal floatation devices (PFDs) have been purchased.

The boat replaces a 15- year old Avon Inflatable boat with a 9 horsepower motor. 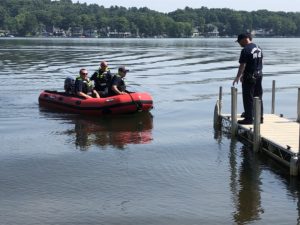 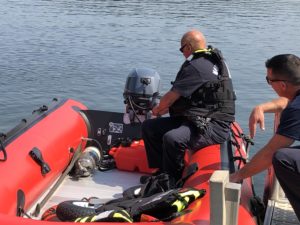 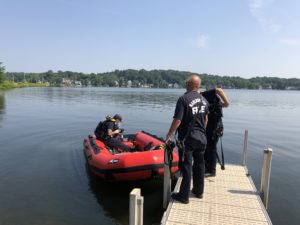 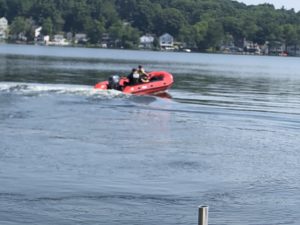