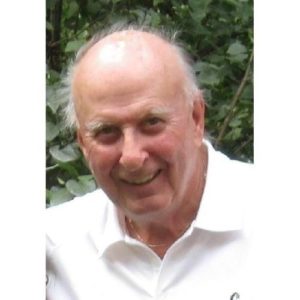 Naples, Fla. – Edison Beryl Munroe of Naples, Fla., formerly of Westborough, passed away after a brief illness Aug. 4, 2019. Ed was able to enjoy all of his 88 years with family and many lifelong friends before being stricken ill less than 2 months ago.

He was born on July 2, 1931, in Flint, Mich., the son of John and Myrtis Munroe. Ed was raised in Lynn with his younger siblings, Ginny and Bobby. His father, John, was a commercial fisherman on schooners out of Gloucester.

After graduating from Lynn Classical High in 1949, Ed attended MIT and the prestigious General Electric Senior Management Training Program. He married Marjorie Martel in February 1962. Ed spent most of his career as an executive in manufacturing at General Electric and Coppus Engineering in Worcester before moving on to life as a full-time entrepreneur in 1985. Ed and Margie opened 4 Annie’s Book Stores together, selling them in 2006 and retiring full-time to Florida.

Ed was an avid golfer and enjoyed Boston sports teams, writing poetry, reading, dining out and good times among his many lifelong friends and his family.

He will be dearly missed by family and many lifelong friends, who were there for him until the very end.