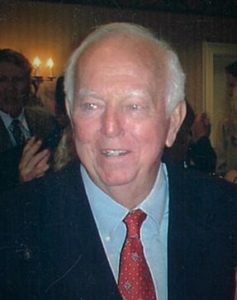 Westborough – Robert Philip McGoldrick, 95, of Westborough, passed away peacefully at home with family on July 30, 2019.

Bob was a well-known and respected entrepreneur, businessman, World War II veteran, husband, father, uncle, grandfather and friend who brought intellectual curiosity, joy and laughter to all who knew him.

Born and raised in Worcester, Bob was the son of the late Louis George and Violet (Sabin) McGoldrick of Lake Quinsigamond.

Bob was educated at Wilbraham Academy and received his bachelor of science degree from The Stockbridge School of Horticulture at the University of Massachusetts, Amherst.

Bob proudly served in the US Army Air Force as a P-51 Fighter Pilot and Instructor in World War II, a vital and humble member of “The Greatest Generation”.  His passion for flying, staying abreast of the latest innovation in aviation and aerospace was evident throughout his life-a passion he shared with his grandson Ryan.

He was the founder and owner of The Green Thumb, Inc  in Westborough, a 70 year old family greenhouse and florist business. He was recognized nationally as one of America’s finest growers and often was keynote speaker at the annual Ohio State Horticultural Industry Association meetings . He was also a member of the Mass Florist Association and  Mass. Flower Grower’s Association. Bob was a pioneer and in 1950 was the first horticulturalist in the East to introduce hydroponics. He named his business The Green Thumb, Inc., “the sixth sense for telling what a plant needs when it needs it.”  His passion for science, engineering, innovation in the industry coupled with an aesthetic eye for color and design was evidenced in all he produced.

Bob’s passions for golf, history and sailing were lifelong interests. He sailed in the World Championship Star Class Races along with his wife June as crew in 1968. Bob possessed a true zest for life. He will be most remembered by all who knew him, for his quick wit, extraordinary sense of humor, perfected cadence and ability for joke-telling and story-telling all with a twinkle in his eye.