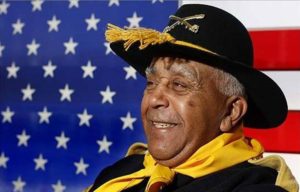 Southborough – Napoleon “Pete” DePina, 88, of Southborough, died peacefully Aug. 16, 2019 at Rose Monahan Hospice Home in Worcester, with family members by his side, as the result of a stroke. He was the beloved husband of Elisabeth “Betty” (Dannenman) DePina, who passed away in 2012.

Born in New Bedford and raised in Falmouth, he was the son of the late Edward J. and Mary (Gonsalves) DePina.  After graduating from high school, he followed in his father’s footsteps and joined the US Army which took him to Germany for 6 years. While in Germany he met and married his wife Betty and had their first child, Richard there.  Betty nicknamed him “Pete” which stuck with him for the rest of his life.  Pete spent some time in Korea and after being re-assigned back stateside, Betty gave birth to daughter, Susan.

Pete loved the military where he personally experienced the transitional times – before, during, and after integration of the Army. After 10 years of military service in the field artillery, achieving the rank of Master Sergeant as a tank commander, he reluctantly did not re-enlist because housing was not available or “friendly.” He felt it was more important for his family to be together.

The family resided in the Boston area for 5 years before moving to Southborough in 1962. He drove an auto transport truck for the former Anchor Motor Freight in Framingham and became involved in the community focusing on what he could do to help the children.

To highlight his many contributions, he became a member of the Parks and Recreation Commission, eventually becoming Chairman. He got involved in Little League, was a Boy Scout and Eagle Scoutmaster  (camping in the winter was no problem for Pete), was a sparkplug in planning and organizing just about anything he felt could benefit others….a hockey program for the boys, a figure skating program for the girls, a swimming program for both and it started in his own backyard pool. In addition, he was instrumental in establishing ball fields in town, working with the Southborough Police Department to expand on and instill a positive relationship and respect between the police and the kids while they were young. He was a recipient of Southborough’s Man of The Year Award.

Pete organized The Central Massachusetts Athletic Association (now defunct), a youth football program, which grew to 90 teams and cheerleaders, involving 26 communities and ultimately uniting black and white communities through the vehicle of safe and fair play, positive attitudes, and lots of fun. He served as Chairman for 25 years.

Pete retired from Anchor Motor Freight and went to work for Tri-State Truck Sales and Service in Shrewsbury, where he has worked for 25 years until his abrupt passing.

He had an amazing knowledge and deep love for American military history with a focus on the period immediately following the Civil War (1866) through the completion of the integration of all U.S. branches of the military.

In 2001 he gathered a few long-time friends and associates to form Buffalo Soldiers Heritage, an educational  inter-racial organization, for the purpose of increasing public awareness of this part of history to children and adults alike, and to provide a more complete version of American History – one which included the  significant and important contributions and sacrifices made by African Americans and other minorities in the military, and previously not included in our history books.  The group did this through lectures, exhibits, participating in parades, and simple conversation.

Pete was a man of his word and trust was extremely important to him. He was kind, generous, very humble, private, honest (sometimes brutally), a motivator with a smile or a handshake, a person with great wisdom and instincts, a stickler for being on time, hardworking, seemingly tireless, goal oriented, a task master, an observer and listener who often worked behind the scenes,  quietly and privately “planting seeds” for thought or action he thought should be taken by someone else – always for another’s benefit or the good of the company/project. He was selfless.  He preferred face-to-face communication.  He was “technologically challenged,” but always tried to overcome it…. sometimes.

Pete loved working outdoors, especially on his lawn. He used to plant trees to watch them grow. He loved the color of flowers, but hated having to mow around them and the additional time and attention to caring for them.

He was terribly frustrated over things he could no longer do for himself. He was always appreciative and often moved to tears by the acts of friends who did something for him voluntarily or when he “succumbed” to asking for help.

There will be a graveside ceremony Thursday, Sept. 5, at 11 a.m., at the Southborough Rural Cemetery, Cordaville Road, Southborough.

Arrangements are under the care of the Morris Funeral Home, 40 Main St., Southborough.

To learn more about his work with the African American military regiments click on the link below: