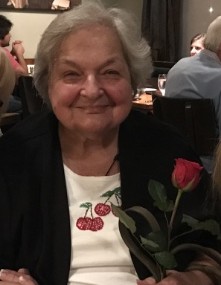 Born in Chicago, Il., she was the daughter of the late John Joseph Henry and Anna Barbara (Pecelunus) Staken. She was raised and educated in Illinois and graduated with a bachelor’s degree from Illinois Institute of Technology.

Prior to retirement, Mrs. Copeland was employed as a substitute teacher, office support for a software company, child caretaker, and owner of a pizza restaurant.

She had been a member of the Bahá’í faith, teaching the essential worth of all religions, and the unity and equality of all people.

Jean loved baking birthday cakes for her grandchildren and making her favorite pumpkin pie and apple strudel. She also enjoyed sewing, arts and crafts, card making, jewelry making, reading, listening to John Denver and Peter, Paul & Mary Music, and was a Star Wars enthusiast. Most importantly, she cherished the time she spent with her family and friends.

She is survived by her three children, Jeff Copeland and his wife Mary of Jefferson, Jerri Holland and her husband Jim of Hopkinton, and Jeanine Deranin of North Grafton, and her grandchildren, Theresa, Natalie, Luciana, Anthony, Johanna, Matthew, Dominic, Alexxa, Calvin, Chelsey, Nick and Nate. She was the mother to the late June Kangas.  She was also predeceased by her siblings, John Joseph Staken and Edward Staken.

A funeral procession will be formed Monday, Sept. 9, at 10:15 a.m., at the Britton-Summers Funeral Home, 4 Church St., Westborough, followed by a graveside funeral service at 11 a.m. in Pine Grove Cemetery. Calling hours at the funeral home are Sunday, Sept. 8, from 3-5 p.m.

In lieu of flowers, donations in her memory may be sent to Kindred Hospice, 406 Hemenway St., Marlborough (Please make payable to “Grace Hospice Foundation”).