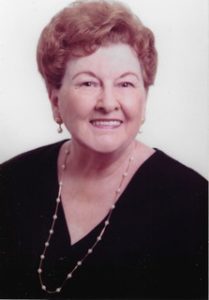 Marlborough – Barbara (Wilson) Rule, 96, of Marlborough and formerly of Shrewsbury, passed away Sept. 14, 2019 after a period of declining health.

Barbara was an executive assistant for Mass Department of Mental Health for many years and a life-long student of metaphysics, meditation and creative writing.

After retirement, she and Gordon moved to New Smyrna Beach, Fla., where Barbara was very active in the National League of Pen Women, serving as local chapter President and Treasurer. She also authored two books, “Polar Knight” and “Lisa Beth of Monaghan,” many poems and short stories which were published. In 2003, Barbara was honored as Author of the Year by the Pilot Club of Daytona Beach, Fla.

In 2005, Barbara moved back to Massachusetts and resided at New Horizons in Marlborough for 14 years, where she was active with writing groups.

In lieu of flowers, donations may be made to Reading is Fundamental, a children’s literacy program at www.rif.org.