She and her father travelled to Los Angeles so Alina could accept her award and take part in the conference.

The SpaceTime Student Competition is a juried competition that provides an opportunity for high school and college students to exhibit their original computer-based media on a national and international stage.

The theme for competition was “Thrive” and participants were required to submit a jpeg image with minimal use of text and original imagery. Judging criteria included artistic merit, design, originality, technical excellence, and content. 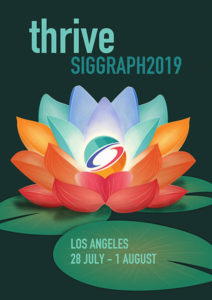 Driven by a keen interest in STEM and art, particularly when combined, Alina was looking for inspiration for some art projects to do on her own using a graphic application she recently acquired for her iPad.

She found the website, www.graphiccompetitions.com, a worldwide resource for those looking for competitive opportunities when lead her to the SpaceTime 2019 International Student Competition.

“I drew a lotus flower that represented the theme ‘Thrive’ and in the center of the lotus I put the logo of the conference so the center is like a symbol of technology and innovation which is what the conference was all about,” Alina explained. “I never expected that I would win but I decided to submit it and a few months later I received an email from Anna Ursyn who was the main chair of the competition.”

Alina’s project, titled “Blooming Society,” was selected for second place from 270 entries from around the world.

When asked how she selected her design, Alina said, “When I hear the word ‘Thrive,’ I think of spring…so I made the petals different colors to represent different communities in society and I put the logo in the center because it was about all coming together around the theme of technology and innovation and that’s what powered the lotus flower to bloom.”

She said that the conference included exhibits of the pairing of technology and art, such as motion detection sensors, projection systems and 3D printers.

“There are different kinds of art that are created by science and some of those examples are things I saw at the conference like 3D printed clothing – it’s a form of art and science at the same time,” Alina explained.

Her favorite experience was a studio where she could see a 3D dress being created.

Alina is considering studying science and engineering in college. Meanwhile, she looks forward to heading back to Shrewsbury High, where she will be taking a full course-load including pre-calculus and chemistry, as well as playing clarinet in the high school band.