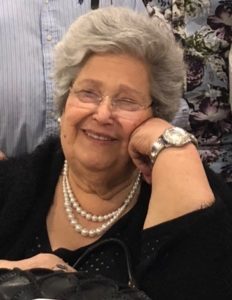 Hudson – Maria de Fatima Medeiros Cavaco Andrade in her 79th year passed peacefully at her home Oct. 7, 2019 surrounded by her loving husband and children. “Fatima,” as she loved to be called, fought a long brave battle with heart and lung disease.

She was predeceased by her father, Lino Cavaco; her mother, Almerinda Cavaco; and her sister, Lourdes Provencher, all of Hudson. Fatima leaves her husband of 59 years, Antonio Leandres Andrade. Her spirit is carried on by her five children and their families, Gualter Andrade, his wife Debbie and their two children, Alicia and Justin; Gil Andrade, his wife Deborah and their two children, Jessica and William; Almerinda Andrade and her two children, Adrien and Olivia; Dino Andrade, and Belia (Grace) Furbush, her husband Paul and her step-children Savannah and Zach. She was the loving great-grandmother to McKenna and McKyla, and a beloved sister to Zenaide Ferreira of Canada, Victor Cavaco of Hudson, Lino Cavaco of Florida and Cidalia Cavaco of Hudson. She was an amazing aunt to many great-nieces and nephews and a kind and welcoming friend to many.

On April 10, 1940 Fatima was born in Rebeira Grande, Sao Miguel, Acores, Portugal. Fatima married in 1959 and moved to Santa Maria, Azores where she gave birth to her five children.

She was employed by the Portuguese government as an operator and general secretary for the Correrios/ Telecomminicacoes office walking distance from her home.

In 1978 she picked up and moved with her family to Hudson where she worked very hard to raise her family and gave them the greatest gift of being a loving mother and grandmother. She proudly became an American citizen.

Later she enjoyed working and was employed by Data General, then for the Hudson Public School as a Bi-lingual Coordinator and finally before retirement for Thomas E Sears Insurance Agency.

Her greatest love was to live life, spend time with family, sit by the ocean and eat great food. She cooked huge Sunday meals that could feed the whole family and anyone that came along. Her home was always open to family and friends. She was member of the Hudson Portuguese Club and the Holy Ghost Society.

Relatives and friends are invited to a period of calling hours Sunday, Oct. 13, from 3-6 p.m., at TIGHE HAMILTON REGIONAL FUNERAL HOME, 50 Central St., Hudson. A Mass of Christian Burial will be celebrated Monday, Oct. 14, at 9 a.m., at Saint Michael Parish, 21 Manning St., Hudson, followed by procession to Saint Michael Cemetery in Hudson for committal services.