Westborough – Todd Alexander, and the late Charlotte Spinney will honored at the Westborough Good Scout Award ceremony to be held Thursday, Nov. 7 at the DoubleTree Hotel in Westborough.

Alexander will be honored as the organization’s Good Scout while Spinney will be named posthumously as the recipient of the Lady Baden-Powell Good Scout Award. 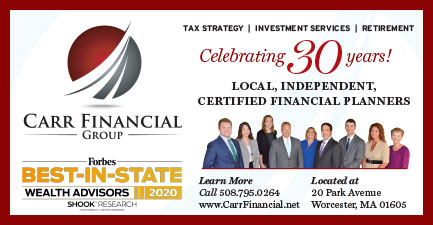 The Good Scout Award Dinner raises money to support scouting while recognizing people who personify the Scout Oath and have excelled in their career and personal lives.  The Mayflower Council, Scouts Boy Scouts of America presents this award to individuals who have exemplified themselves in outstanding community leadership, have demonstrated a concern for the welfare of others and have been role models to all young people.

Alexander, a lifelong resident of Westborough, is a managing director of Newmark Knight Frank and works in the firm’s Boston-based retail services team.  He previously was a vice president at Colliers International’s brokerage group and also served as an asset manager with Carruth Capital in Westborough.

A graduate of Westborough High School, he holds a bachelor of science in accounting from Northeastern University as well as a master of business administration from its D’Amore-McKim School of Business.

Alexander serves on the board of directors of Easter Seals of Massachusetts and is a corporator for Main Street Bank (formerly Marlborough Savings Bank).  He also serves as a member of Westborough’s  Zoning Board of Appeals, Design Review Board, Economic Development Committee and recently became president of the newly-formed Westborough Police Foundation.

The Lady Baden-Powell Good Scout Award is named after Olava Baden-Powell who founded the World Association of Girl Guides and Girl Scouts based upon the Boy Scout model begun by her husband, Lord Robert Baden Powell.  The award is presented to distinguished women who have had a significant impact on Westborough area youth through service to others, community leadership, and personal example. Through their dedication and commitment, award recipients enrich the lives of those in our community.

In 1995 Spinney co-founded a scholarship program for Westborough middle school students who would potentially achieve academic success if provided with a strong support system. The unique and innovative program pairs each student with a middle school, a high school and a community mentor who agree to work with the student throughout the high school years.  Spinney was active in many organizations including the Rotary Club of Westborough, Habitat for Humanity, United Way, the Westborough Library and the YWCA.  For many years she was a corporator, trustee and director of Westborough Savings Bank (now Avidia Bank). She was a charter member of the Mewhinney Chapter of the National Football Foundation and College Hall of Fame.

The Good Scout Dinner will begin at 6 p.m. with an opening ceremony by the Scouts at 6:55 p.m., followed by dinner and the award presentations.