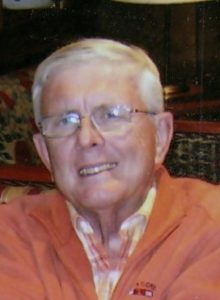 Hudson – Robert F. O’Malley, 76, of Hudson, passed away unexpectedly Oct. 8, 2019 at Marlborough Hospital, surrounded by his loving family. He is together again with his beloved wife, Mary (Murphy) O’Malley, who predeceased him in 2014.

Bob was born April 5, 1943 in Fitchburg, a son of the late James J. and Elizabeth (Haley) O’Malley. He graduated from Ayer high School and went on turn earn his bachelor’s degree from St. Anslem College and a master’s degree from Anna Maria College. He bravely served his nation in combat from 1968 until 1970 in the United States Army during the Vietnam War, earning several commendations and the rank of Sergeant.

He had resided in Hudson since 1976 when he moved from Shirley.

Bob served his community as a Probation Officer for 36 years, retiring as the Chief Probation Officer at the Marlborough District Courts. He was a longtime member of Saint Michael Parish in Hudson, where he also served in various roles for the St. Vincent De Paul Society.

Bob is survived by his son, Frank O’Malley of Hudson; his grandchildren, Lauren, Timothy and Daniel O’Malley, also of Hudson; and his niece, Maureen Buck of Fairbanks, Ak. In addition to his wife and parents, he was also predeceased by his siblings, James O’Malley and Mary Buck.

Relatives and friends are invited to a period of calling hours Tuesday, Oct. 15, from 5-8 p.m., at TIGHE HAMILTON REGIONAL FUNERAL HOME. A Mass of Christian Burial will be celebrated Wednesday, Oct. 16, at 9 a.m., at Saint Michael Parish, 21 Manning St., Hudson, followed by interment at Saint Michael Cemetery in Hudson.

In lieu of flowers donation can be made in memory of Robert F. O’Malley to Special Olympics Massachusetts, 512 Forest St., Marlborough, MA 01752 (https://www.specialolympicsma.org/).