Almost 30 years later, she is grappling with that personal story in “New-found-land,” her debut poetry collection tentatively scheduled for a February 2020 release.

“It was an ecological disaster, it was an economic disaster and it was a cultural disaster,” she said of the 1993 collapse of the Northwest Atlantic Cod fishery around which her coastal home in the Newfoundland community was founded.

Indeed, the fishery had driven the local economy and culture since the late 1400s but grew critically depleted beginning in the 1960s. In 1993, that depletion turned to decimation when the fishing output of the region dropped by 99 percent.

As she was early in her career publishing in local journals and teaching at an area school, the downturn, Hobbs said, left her with little choice but to uproot her family in search of a more stable economy.

She and her husband moved to Massachusetts where her husband secured a job as an animator at a local video game company. Even with that economic security, however, Hobbs struggled to find her place in her new home.

“I was kind of just hanging on,” she said. “I couldn’t even work here. It took a while just to get work permission.”

Hobbs spent that interim period without work writing and establishing roots in the local publishing market. She then kept doing so even after finding a job as a college professor at Pine Manor College in Chestnut Hill, and later, as a high school teacher in Hudson.

By 2004, all that writing had coalesced around two major themes: Hobbs’ longing for her home on the Canadian coast, and her feelings of exile in America. Around the same time, she prepared the manuscript of what became her soon-to-be-published book.

“I wanted to acknowledge the value of my home, my family and my culture as it informed who I am and how I think about the world,” she said of her thinking as she wrote “New-found-land.” 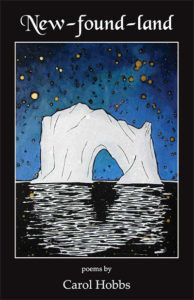 Though the initial manuscript won the 2004 edition of prestigious PEN Discovery Prize for New England literature, Hobbs initially struggled to find a publishing house to print her book.

That struggle turned into a 15-year fight, involving dozens of submissions to publishers across the country. Over the years, in response to her submissions, Hobbs saw everything from flat-out rejections to heartfelt notes from editors explaining that they loved her work but couldn’t take it. She never saw an offer to publish.

That changed earlier this year, however, when, in response to Hobbs’ latest blast of submissions, the publisher of the North Carolina-based Main Street Rag said he would like to offer her a contract.

Contract signed, Hobbs will now have her finished copy of “New-found-land” in hand in a matter of months. But in the end, it’s not her copy that she is thinking especially about.

Instead, 30 years after she left them in search of a future their town seemed unable to provide, Hobbs is excited for her family back in Springdale, Newfoundland to read what she describes as an ode to them, their stories, and the pain of her emigration.

“I think that once the book comes out and they see the poems, they will see the great love I have for them,” she said “…They’re going to understand what this is and how much I value their lives and our culture.”

For more information on Hobbs, her writing and her book, visit carolhobbspoet.com.