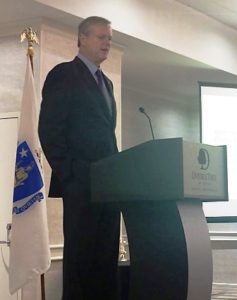 During the governor’s wide-ranging talk, he touted his administration’s successes while also acknowledging things that still must improve.

The increased Rainy Day fund, stricter regulations regarding the prescribing of opioids, education, innovation, and the MassWorks Infrastructure Program were some of the success stories, he said.

MassWorks in particular, the competitive grant program that provides capital funds to municipalities that can then be used for infrastructure projects such as housing and redevelopment, was one particular success of which he was proud of, he said.

“It helps communities get things done,” he added.

He also praised the State’s Community Compact Program, which encourages municipalities to adopt “best practices”. The state, then in turn, would support the municipality with technical support and allow it to bid on state grants.

The governor noted that it was important for the commonwealth to continue to support community colleges and vocational schools so they could teach needed skills.

“That’s the one thing we hear from businesses over and over,” he said. “They need more skilled workers.”

Housing, and more to the point, affordable housing, was one critical area that officials needed to urgently address, he said. Since the year 2000, 600,000 more people had moved to the state, yet the housing did not meet that demand.

“It also trickles down to transportation,” he added, “which is now a point of serious concern and urgency.”

The housing deficiency was one reason, he noted, that Amazon stopped considering any Massachusetts cities as the site of its new headquarters.

There are currently three bills pending in the legislature, Baker said, pertaining to transportation. One bill is related to alternative ride companies such as Uber and Lyft, which he said play a significant role in congestion.

Another bond bill, for $18 billion, would be for additional capital authorization for things such as roads, bridges and other transportation and infrastructure needs. (Further details may be found at https://www.mass.gov/news/baker-polito-administration-files-18-billion-transportation-bond-bill.)

“And our telecommuting rates are much lower compared to other parts of the country,” he said.

“If we don’t find a way to improve housing, it’s going to be a significant drag on economic development,” he stressed. “Something needs to happen, because it affects young people, moderate income, low income, everyone.”