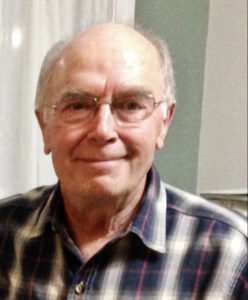 Shrewsbury – David L. Goland of Shrewsbury, formerly of Westborough, passed away peacefully October 30, 2019 at UMass Hospital in Worcester. He is survived by his wife of 56 years, the former Jane Hawkins. He was the son of Shirley and Ernest Goland.

David was preceded in death by two sisters, Ruth Loeb and Sandy O’Neill. He leaves behind a sister, Jean O’Rourke, and three sons and their wives: Daniel and Crystal of Bedford, NH, Timothy and Jennifer of North Andover, MA, and Glen and Krissy of Portland, OR. He also leaves seven grandchildren: Ashley, Taylor, Casey, Jude, Jamie, Shayla, and Delani. He also leaves his best friend, Mike Tate.

David grew up in Berlin, NH and graduated from Keene State College and Ohio State University. He taught mathematics at Quinsigamond Community College for 36 years.  He was an avid golfer, traveler, hiker, and mountain climber and got great satisfaction from his work with the Boy Scouts. He especially enjoyed his grandchildren.

A memorial service will be held on Saturday, November 16 at 10:00 A.M. at The Congregational Church of Westborough, 57 West Main St., Westborough.

Burial will be private at a later date. In lieu of flowers, contributions in his memory may be made payable to UMass Memorial Foundation or UMMF and sent to: Office of Advancement, UMass Memorial Medical Center, 333 South Street, Shrewsbury, MA 01545 Attn: 6 East