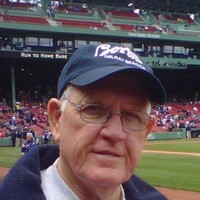 Holden – John P. Manning Jr., 80 of Holden, formerly of Southborough passed away Thursday, November 7th surrounded by his family, after a more than courageous battle with cancer.

John was born in Marlborough, the only child of John P. Manning Sr. and Kathryn (Brown) Manning. Raised and educated in Marlborough, John graduated from Holy Name High School in Worcester and earned an associate degree from The Ward School of Business. He then embarked on a 38-year journey representing Kraft Foods and excelled in sales before retiring. He also served for a time in the Massachusetts Army National Guard.

On June 9, 1962, John married the woman who became the Love of his life and partner for the next 57 years, Donna L. Betti. They enjoyed life raising their family with love and devotion in Marlborough, Southborough, and Holden. They also wintered in Delray Beach Florida for 15 years.

John was a member of St Mary’s Church in Jefferson, and a former member of St Anne’s in Southborough. John’s favorite thing in life was spending time with his family, especially his four granddaughters. His second love was The Boston Red Sox. He was an especially enthusiastic Boston Red Sox fan, who followed the team religiously over the years. He also enjoyed Classic Cars, attending classic cars shows, with a special interest and love for the 57 Chevy convertible, and 50’s and 60’s music. Active in his town, John served as Southborough Water Commissioner and as a member of the Southborough Rotary Club.

Friends and relatives are invited to calling hours Monday, November 11th from 3:00 pm to 6:00 pm in the MERCADANTE FUNERAL HOME & CHAPEL, 370 Plantation St, Worcester, MA 01605. His funeral service will be held, Tuesday, November 12th departing in procession from the funeral home at 9:45am to St Anne’s Church, 20 Boston Rd, Southborough, where his Celebration of Christian Burial mass will be held at 10:30 am. Burial with military honors will follow in Immaculate Conception Cemetery in Marlborough.

In lieu of flowers memorial remembrances in his name can be made to the Shriner’s Hospital for children, 51 Blossom Street, Boston, 02114, www.shrinershospitalsforchildren.org or the Jimmy Fund, 10 Brookline Place West, Brookline, MA 02445, www.jimmyfund.org.