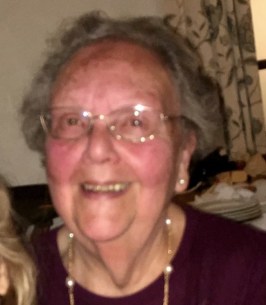 Northborough – Barbara E. (Brooks) Livermore passed away peacefully on Monday, November 11, 2019, at the age of 83 years old. Barbara was the high school sweetheart and beloved wife of Carl G. Livermore. They were married on October 6, 1956 and recently celebrated their 63rd anniversary.

Barbara was born and raised in Worcester, a daughter to the late Ernest and Irma (Magnani) Brooks and a sister to the late Beverly Brooks. She was a graduate of South High School in Worcester and worked as a telephone operator for the former New England Telephone Co. before taking time to raise her family. She then worked many years as a cafeteria manager for Northborough’s Peaslee Elementary School prior to her retirement in 1993. Prior to her marriage, Barbara was a professional tap dancer, performing at many venues in the Worcester area with her sister Beverly.

Barbara, or as family & early friends fondly called her – Muggins, is most lovingly remembered as a devoted wife, mom, Grammy and GG. She loved spending time with her family. Her grandchildren and then great grandchildren were great sources of joy to her. She found her happy place in frequent visits to the ocean and beaches in Maine where she enjoyed collecting sea glass, shells and gathering with family. In earlier years she enjoyed cake decorating and flower arranging, and more recently, crafting and coloring with Olivia.

A funeral service will be held for Barbara at 2 p.m. on Saturday, November 16, at Hays Funeral Home, 56 Main Street, Northborough. There are no public calling hours. Please consider making a memorial donation in Barbara’s name to the Alzheimer’s Foundation of America (https://alzfdn.org/support-us/donate).