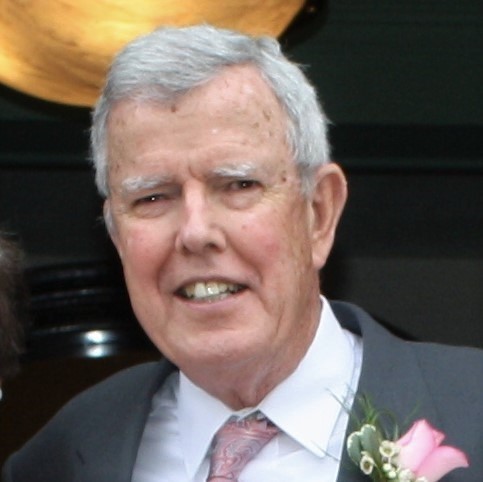 Westborough – David A. Fay, 81, of Westborough, passed away peacefully on Saturday, November 16, 2019. He was the husband of Carolyn M. Black and was predeceased in 2013 by his first wife, Anne M. Fay.

Born in Boston, he was the son of the late Andrew and Katherine (Kelley) Fay. He was raised and educated in Needham and was a graduate of BC High School. He received a BBA in Marketing from the University of Notre Dame and upon graduation entered the Navy’s Officer Candidate School, achieving the rank of Lieutenant. After his honorable discharge from the Navy, he earned his MBA from Babson College.

Dave was employed as a salesman in the paper and package industry for over 40 years, most recently at H. T. Berry Company, retiring in 2017.

He was a communicant of St. Luke the Evangelist Church where he served as a Eucharistic Minister. He was a member and Past Grand Knight of the John Boyle O’Reilly Council 85, Knights of Columbus, a Fourth Degree Member of the Edward McSweeney Assembly, a member of the American Legion, the Westborough Amateur Hockey Association and was previously on the Dismas House Board of Directors. He was also past president of Holy Cross Sodality of Our Lady, Worcester County.

In addition to his wife, he is survived by one son, Andrew Fay and his wife, Karen, of Westborough; two daughters, Sheila Cowles and her husband, Steve Holhubner, of Suffield, CT and Megan McGoff and her husband, David, of Ashland and seven grandchildren, Matthew Cowles, Max Holhubner, Michael McGoff, Katie McGoff, Jack McGoff, Kealy Fay and Blaire Fay. He was the grandfather of the late Nicholas Cowles.

Dave had an innate passion for helping others, whether it be coaching youth sports or volunteering his time through charities. More than anything, he loved supporting his children and grandchildren.

His funeral Mass will be celebrated on Thursday, November 21, at 10:30 A.M. in St. Luke the Evangelist Church, 70 West Main St., Westborough. Burial, with Military Honors, will follow in St. Luke’s Cemetery. Calling hours at the Pickering and Son Westborough Funeral Home, 62 West Main St., are Wednesday from 4 to 7 P.M. Members of Council 85, Knights of Columbus will conduct a prayer service at 6:45 P.M.

In lieu of flowers, donations in his memory may be made to Dismas House, 30 Richards St., Worcester, MA 01603