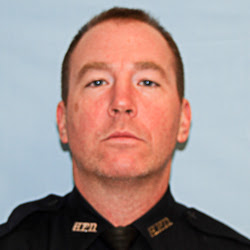 Hudson – After hearing the news that Hudson Police Sgt. Scott Chaulk, 53, suffered a stroke on Oct. 30 while visiting his son, who is studying abroad in Barcelona, the town of Hudson has come together to support the ailing officer and his family. Since suffering the stroke, Chaulk remains hospitalized in Spain.

On Monday, Nov. 25, Hudson restaurants Rail Trail Flatbread Company and New City MicroCreamery will be donating 100 percent of their profit to the fund set up for Chaulk. Avidia Bank, who is also based in Hudson, is supporting the initiative and will be making a donation as well.

According to Chief Michael D. Burks, Sr., Chaulk joined the Hudson Police Department in April 1998 as a patrolman and later served as a detective before earning a promotion to sergeant in 2015. He has also worked with many local and state law enforcement agencies throughout his career.

The Chaulk Family Medical Fund has been established to accept donations to defray his medical costs. Contributions may be sent to :