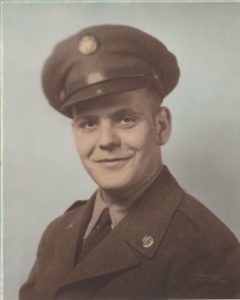 Hudson – Robert “Bob” H. Luther, 87, of Hudson, passed away peacefully on Wednesday, November 27, 2019, at Saint Patrick’s Manor in Framingham, surrounded by his loving family, after a period of declining health. He is survived by his beloved wife Emma Jean (Guthrie) Luther.

Bob was born in Pittsburg, PA, on October 12, 1932, a son of the late Walter and Mabel (Cole) Luther. He was raised in Uniontown, PA, where he graduated from high school.  After finishing school, Bob enlisted in the United States Army in 1952, honorably serving his country for over twenty years and eventually retiring as a Master Sergeant. During his tour of duty, he served in Germany and the Embassies in Teheran, Iran, Cairo, Egypt and Vienna, Austria. Bob subsequently successfully owned and operated, One Hour Martinizing Dry Cleaners in Hudson, before eventually retiring after thirty years in business. He was a longtime member of the Hudson First United Methodist Church, the Hudson Rotary Club and the Masonic lodge. He was an avid reader and enjoyed woodworking in his spare time.

In addition to his beloved wife, Emma Jean (Guthrie) Luther, he was also survived by his daughter, Deborah L. Kauffman and her husband Mike of Hudson; two sons, Robert M. Luther and his wife Sheryl of Hudson and Douglas N. Luther and his spouse Craig Sales of NY; 5 grandchildren, Daniel, Michael, Rebecca, Sarah and Matthew and 4 great-grandchildren, Hugo, Nora, Miles and Evelyn . He was predeceased by his 5 siblings.

There will be no calling hours. A Celebration of His life will be held at 10:30 am on Tuesday, December 3, 2019 at Hudson First United Methodist Church, 34 Felton St., Hudson, MA, followed by interment in Forestvale Cemetery in Hudson.