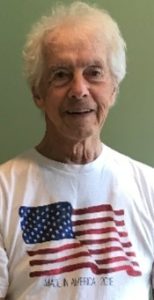 Westborough – Donald W. Collins Sr., 84, of Westborough, passed away on Tuesday, December 10, 2019 at the Marlborough Hills Nursing Facility. He was the husband of the late Mary A. (Sharpe) Collins.

Born in Boston, he was the son of the late Alphonse and Mary (Collins) Schwartz and was educated in Boston schools. During the Korean Conflict he served with the United States Air Force.

Don was employed as an Inventory Representative at Verizon in Southborough prior to his retirement.

He was a communicant of St. Luke the Evangelist Church where he served as an usher. He did mission work in Honduras and Guatemala, enjoyed all sports and was a former hockey and baseball coach.

In lieu of flowers, donations in his memory may be made to the Alzheimer’s Association, 309 Waverly Oaks Rd., Waltham, MA 02452 or at www.alz.org