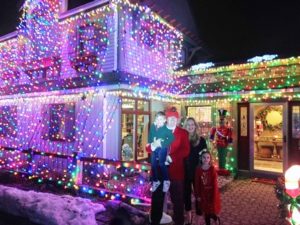 Southborough – Growing up in Somerville, John Mansfield’s family always decorated the outside of their house for Christmas. So when he and his wife Alicia moved to Southborough five years ago, he knew he wanted to continue that tradition. And he has…and then some. Although it’s not quite on the level – yet – to that of the display created by iconic movie character, Clark Griswold in National Lampoon’s Christmas Vacation, Mansfield has clearly gotten into the spirit, adorning his 11 Pine Hill Road home with thousands of Christmas lights that he has painstakingly put up.

Nearly every inch of the front of his home is lit in an array of colored lights. Holiday figures also dot the front yard. Looking at his display, he can’t help but be disappointed, he said, that he didn’t get to a few of the things he wanted, due to the bad weather in November.

No one viewing the display would notice that though, because they would be too dazzled by the awe-inspiring work that he has done.

The display also is fun for Mansfield’s little helpers, his children, Olivia, 7 and Jack, 4, who delight, he said, in living in a Christmas wonderland that also includes many indoor decorations as well.

Mansfield has also inspired several of his neighbors.

Down the street, the Kerwin family – John (“a good guy in spite of being a Baltimore Ravens fan,” Mansfield laughed), his wife Ashley, and their kids Sophia and Tyler), have also lit up their house. Next door to the Mansfields, Joe Shay (with the approval of his two-year-old son, Joey)  has displayed, thanks to friend Kevin Meehan, a number of large scenic boxes with life sized holiday characters. Shay is also using his display as a way to raise monies for Pathways to Peace Uganda, a nonprofit started by his daughter, Erica. The organization’s mission is dedicated to the reintegration of former child soldiers returning from the Lord’s Resistance Army in Uganda.

The families invite all to visit their neighborhood and enjoy their displays. Mansfield also issued a challenge to his fellow Southborough residents.

“I would love for someone to beat me at this next year,” he said. “Bring it on!” 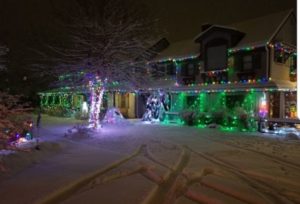 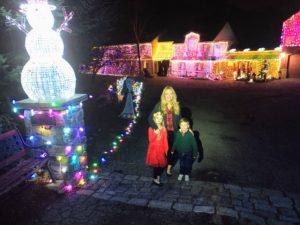