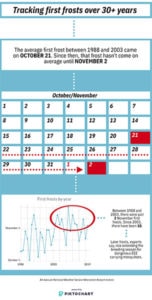 Region – Cheerleader Kam Govoni remembers seeing an unexpected fan sign in the bleachers of the opposing team at a Hudson High School football game this fall.

The sign joked about the mosquito-borne disease that had forced the Hawks to move their night game earlier in the day to avoid prime mosquito hours — “Hudson has EEE.”

“Well…yeah,” Govoni thought. She didn’t get the joke.

Instead, on a gameday that broke the tradition of “Friday night lights” local football games, the sign was a grim reminder of a crisis that spawned reverse 911 calls and parental jitters throughout the summer and across the region.

Infecting five in Worcester and Middlesex counties, and killing three statewide, the outbreak of Eastern equine encephalitis or EEE, as its commonly known, hit Central Mass. harder than any in recent memory. Seeking answers, experts now point to climate change among other reasons and warn this could be a new normal.

“We need to assume that this could happen again and again in the future,” said Massachusetts Department of Health epidemiologist, Catherine Brown. “And we need to make plans incorporating that.”

EEE is no new problem at the state level. It’s struck the South Coast region multiple times in recent decades. Only recently, however, has it spread, with the first human case in Worcester County since at least 2000 occurring in 2012.

The spread has experts alarmed and, in turn, has prompted them to dig into their data, indeed focusing on the climate.

Killing off the mosquito population each fall, the annual “first frost” marks the hard stop to the EEE threat during any year.

That first frost, however, has been coming later and later over recent decades.

The 16 years from 1988 to 2003, for example, saw 14 first frosts in the month of October. The next 16 years up to the present day, meanwhile, have seen just six October frosts. The rest have all pushed into November according to a review of National Weather Service data collected at Worcester Airport.

“It’s unlikely that there’s a single factor that’s driving this,” she said “But we anticipate that, [across the board,] the changes in the migratory habits of birds may be contributing to these worsening effects.”

Birds, Brown’s department believes, bring new EEE strains to the Northeast through those migrations each year. Thus, climate influenced changes in those patterns may influence when strains arrive, sparking outbreaks earlier in the summer.

As she blames climate change for even the majority of the suddenly worsening pattern of EEE infection, though, Brown is quick to note that there are other factors at play.

Still, regardless of the reasons for this year’s spike in activity, the infections took some by surprise while forcing others in government to take action.

The state had placed every town in the Community Advocate coverage area except for Hudson under a “critical risk” warning by the end of the year. Twice, the region underwent aerial pesticide spraying to kill mosquitoes. School districts and town recreation departments almost unanimously cancelled or rescheduled nighttime activities.

“People understood what we were doing and that we didn’t do it lightly,” said John Garside of the Marlborough Board of Health, touting general community support for these measures. “It was the thing to do. We would get occasional calls where folks wanted clarification but I didn’t find anyone who thought we were doing anything wrong.”

Ultimately, back at the state level, Brown acknowledges that she and her department have work to do. She’s now fanning out across Central Mass. speaking with health departments to get feedback on how to best get that work done.

“[We’re asking] how do we take what we have learned during this cycle and not forget it and make sure that it remains in place so that it is more readily accessible to all of us for the next outbreak,” she said. “[We need to make] sure that all these tools that we developed are still readily available and that we don’t forget about them.”

Number one in that tool box, Brown says, are measures designed to educate those still questioning how to respond to the region’s latest environmental threat.

Number one on that list of people Brown hopes to reach are individuals like the fans Govoni saw laughing at the crisis.