Region – Westborough had momentum but Shrewsbury shut it down.

Free throw shooting and rebounding from the Colonials, indeed, dampened an at times fierce Ranger attack in the fourth quarter, head coach Nate Skermont said, helping his team walk away with a 54-42 win.

“They got it real tight but we relied on our seniors,” Skermont said. “That was huge.”

The game started with a flurry of Colonials baskets. They once took a 10-2 lead in the first quarter. Wrestling things back under control, however, the Rangers managed to end the quarter down just three points.

Westborough maintained energy into the second quarter, briefly tying the game at 15-15. They fell behind again shortly after, though, thus heading to halftime on the wrong side of a 23-17 score.

The teams then kept pace with one another in the third quarter before Shrewsbury locked down their end defensively at the start of the fourth quarter.

“We were just focusing on boxing guys out and keeping them to one shot per possession,” Skermont said. “We didn’t give them as many good looks as they got before, but we just had to dig down and grind it out.”

Westborough could not muster a point in its first five minutes of play in the frame as the Colonials extended and eventually secured their lead.

The loss dropped Westborough to a 2-4 win/loss record. Likewise, though, it improved Shrewsbury’s place in a tie with Wachusett for the number one spot in their MidWach A division.

“They kept fighting,” Skermont said. “[Westborough is] a good team. I credit them. But we were able to hang on and win this one on the road.” 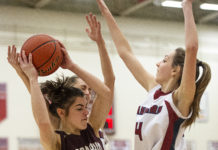 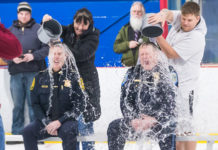