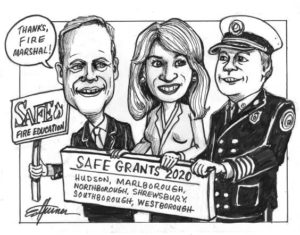 The SAFE program was funded in 1995 and began in 1996, with 18 communities as part of the pilot program. The SAFE program allowed fire departments to send specially trained firefighters into the schools to teach fire safety. The Senior SAFE program began in 2014 to educate the aging population about fire safety and fall prevention.

Marlborough, Shrewsbury, Hudson, Westborough, Northborough and Southborough each earned grants of between $6,000 and $9,000 for their SAFE programs.