Westborough – Members of the Algonquin Regional High School varsity hockey team honored the late Specialist Brian Arsenault during their game against the West Springfield High School Terriers held at the Northstar Arena in Westborough. The game was held on Feb. 15, on what would have been Arsenault’s 34th birthday.

Arsenault, a Bronze Star recipient, was valiantly killed in action on Sept. 4, 2014 while serving Ghazni, Afghanistan. He was 28.

Prior to the game, members of the Vincent F.Picard American Legion Post 234 presented colors. ARHS wore camouflage jerseys as a tribute to the fallen soldier, who himself had played hockey while attending the school. .

Childhood friend Sean Durkin dropped the puck, while Arsenault’s family, including his parents Leslie and Daniel, and sister, Lindsey, looked on. 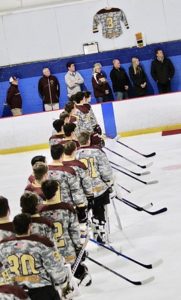