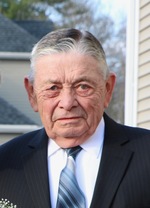 Grafton – Cornelius “Connie” J. Flynn Jr., a lifetime resident of Grafton, passed away peacefully on March 12, 2020, at home under the careful watch of his adoring family to which he so selflessly and generously gave. He was 79 years old.

After nearly 53 years of marriage, Connie leaves his devoted wife, Marilyn (McKay) Flynn who has been his primary caregiver in recent years. In addition, he leaves his four daughters and sons-in-law: Colleen (and Bill) Griffin, Erin (and Kevin) Wajer, Kerry Flynn (and Kevin Molinari), and Shannon (and Terry) Cahill. Affectionately referred to as “P” by his 11 grandchildren, Connie leaves behind Kelly and Joey Griffin, Keaton, Meg and Reagan Wajer, Ryann, Alec and Ella Molinari and Kylie, Kaitlyn and TJ Cahill. He also leaves behind his sister and brother-in-law Ellen (and Paul) Cuddy, his brother Dennis Flynn, nieces, nephews, cousins, and his canine companion, Mack. Connie was pre-deceased by his sister-in-law, Ann (Cocchiola) Flynn.

Connie was born in Shrewsbury and was raised in Grafton, son of the late Mary (Casey) Flynn and Cornelius J. Flynn, Sr. Connie graduated from Grafton High School and, following in the steps of his father and many uncles, went into the trades. Connie attended Worcester Junior College.

Enlisting in the US Navy in 1961, Connie proudly served his country as a radar technician on the aircraft carrier The USS Shangri-La. Following discharge from the Navy,

Connie worked for William F. Lynch and Tucker & Rice companies in Worcester before starting his own business in 1985. Connie proudly owned and operated C. J. Flynn Plumbing & Heating, Inc. for 20 years until his retirement in 2005. Never missing a day of work, Connie ran his business with the same principles that he lived his life – with honesty, integrity, and a tremendous sense of humor. Every customer was a friend and every friend was like family.

Connie was a member of the Pipefitters & Plumbers Union, Local 408/4 throughout his career. Connie served as gas inspector for the Town of Grafton for 20 years.

A lifelong member of Saint Mary’s Parish in North Grafton, Connie’s stewardship to his parish of Saint Mary’s extended throughout his life from altar serving in his youth to sharing his trade skills and services on various building projects.

The family would like to extend a special thanks to Dr. Howard Sachs of UMASS for his exceptional care and commitment to Connie’s health and well-being, especially in Connie’s final years.

Connie’s funeral Mass and burial will be private due to the current Massachusetts state of emergency with COVID-19. We will have a second Mass and celebration of life during the summer for friends and family not able to attend services at this time. This will provide a more personal opportunity to share stories and memories of Connie.

A Book of Memories to share a favorite story or message with Connie’s family is available at www.RoneyFuneralHome.com.