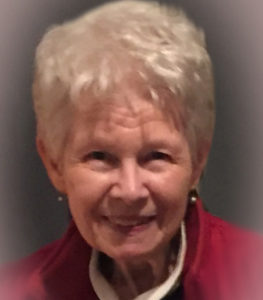 Shrewsbury – Gail E. (Johnson) St. Pierre, 79, passed away Thursday March 19, 2020 at UMASS Memorial Medical Center – University Campus, with her family by her side. She was predeceased by her loving husband, Paul L. St. Pierre, in 1997.

Born in Worcester and raised in Shrewsbury, Gail was one of three children born to the late Irving H. and Barbara E. (Henderson) Johnson. She was educated in Shrewsbury as well; she was a 1958 graduate of Howard W. Beal High School, after which she attended Memorial School of Nursing and became a Registered Nurse. Gail fell in love with and married Paul, and they settled in their hometown of Shrewsbury– as much as she loved nursing, being a dedicated mother to her children was her pride and joy.

In her free time, Gail enjoyed being creative, whether it be playing the piano or painting with oils and acrylics. Also known as “Julia Child II,” she revealed her talents in the kitchen, whipping up delicious meals for friends and family. Above all, Gail was most proficient in being a devoted mother and grandmother.

Gail is survived by her loving daughter, Paula E. Raymond and her husband Michael of Pomfret Center, CT, and her devoted son, Jeffrey H. St. Pierre of Shrewsbury; two wonderful granddaughters, Erin and Anna Raymond; her siblings, Carole Bowles and her husband Jack of Shrewsbury and Dr. Robert Johnson and his wife Denise of Stowe, VT; as well as nieces and nephews, Wendy Hodgerney, Christine Kearns, and Michael Bowles, Brett and Bri Johnson, and Hansen Dalmasse Johnson.

Services for Gail will be held privately. In lieu of flowers, memorial donations may be made to the Arthritis Foundation of Massachusetts via www.arthritis.org/donate.  Arrangements are under the care of the BRITTON-SHREWSBURY FUNERAL HOME, 648 Main Street, Shrewsbury, MA.