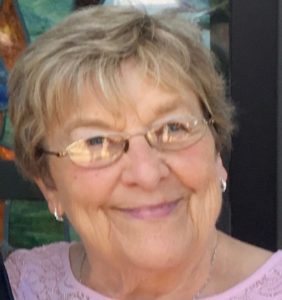 Northborough – Phyllis A. Stone, 76, of Northborough, passed away on Tuesday, March 24, 2020 at UMass Memorial Hospital in Worcester. With the love of her life, Robert J. Stone close by.

Born in Worcester, she was the daughter of the late William and Blanche (Milliken) Schenker. Phyllis was raised in Westborough, a graduate of Westborough High School and an attendee at the Green Mountain College in Vermont.

Phyllis worked with her Dad at Comey Oil, then took over the business after he retired.  She served on the Board of Director at the Avidia Bank. She was a member of the First United Methodist Church and a proud member of the Fabric Stash, she loved meeting the girls at Purity Springs for a week of quilting. When her kids were young, Phyllis enjoyed running the Ski School at Ward Hill Ski Area and the office at Regatta Sailing on Lake Quinsigamond.
In younger times, Phyllis and Bob loved traveling in their RV. In more recent years they had so much fun traveling to Hawaii, Alaska and Europe with their good friends. Phyllis enjoyed spending her summers on Lake Winnisquam and winters in Panama City Beach, Florida all with Bob close by her side.

Phyllis adored her grandchildren and would do anything for them. She loved having Dante living in her house and would play tackle football with him in the back yard. She never hesitated to drive to NH to watch Anne and Tucker enjoying life. She cherished the time spent with Gabi and her American Girls and listening to the music performed by Madi and Tori, and mall shopping with the girls. Sailing with her 3 girls in celebration of Mother’s Day, 75th birthday and graduation was a highlight. Phyllis was so proud!

Phyllis was a strong, beautiful woman with an absolute heart of gold. Her love and generosity spilled over to all those whose lives she touched. Her personality was infectious, and her hugs, world-record setting. You could not help but love being around her.

Phyllis’s greatest joy was her husband and true love, Bob. The love and friendship the two of them shared was one in a million and will hold true until the end of time.

In addition to her husband, Phyllis is survived by daughters, Sharon DiSilvestro of Brimfield and Nanci Wonson and husband, Ross, of Florida, Kimberly Cowles and husband, Tim, of Franconia, NH and son Jeffrey Stone of Westport, Maine; one sister, Joan Demorest and husband, David, of Whidbey Island, WA and six grandchildren, Anne and Tucker Cowles, Gabrielle, Madison and Victoria Wonson and Dante DiSilvestro.

A memorial service in the First United Methodist Church will be planned for a future date. Pickering & Son Funeral Home of Westborough is assisting with arrangements.

In lieu of flowers, donations in her memory may be made to Breast Cancer Awareness, a charity dear to Phyllis’ heart or to the First United Methodist Church, 120 West Main St., Westborough, MA 01581