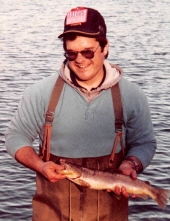 Northborough – Robert “Bob” Chaplin, 68, beloved husband, was called home to God on March 20, 2020 with his wife Karen at his side. He entered this world on July 9, 1951 in New Bedford, MA, born to Joseph and Philomena Chaplin.

Bob loved life and felt especially close to God by the still waters of lakes, streams and the ocean. His heart was always the most at peace when he and Karen were together. He was an avid fisherman of both fresh water and salt water fish.

Bob relished fishing on the Gunflint Trail in northern Minnesota, on the kettle ponds at Nickerson State Park, on Spectacle Pond in Sandwich and on the beaches of Cape Cod National Seashore. He was delighted when Karen got her first fishing waders and shared time with him fishing.

Bob had many fishing stories and adventures with Ray Roderiques, cousin Pauline’s husband and dear friends Bob Heistand, Carl Hogg and Jim Tremper. He even taught his beloved German Shorthaired Pointer, Kinsey to go fishing with him and she would swim for hours in the water around Bob as he caught fish. Bob was an angler instructor for a number of years with Mass Wildlife, teaching fishing clinics for children and veterans. One of the best ways to celebrate Bob’s life would be to take a child, a veteran or a senior fishing!

Bob also enjoyed rock and roll, cruising in his younger years in his 260Z, gardening, playing tennis and playing on a men’s softball team. He had a passion for golfing and was a keen observer of nature. Bob enjoyed cooking and was known for his hot chili and his blazing hot salsa. He loved animals, especially Kinsey, his Pointer and Lily, his black and tan Coonhound.

Bob had a wonderful sense of humor which gave him strength through the years of his illness. He had an amazing ability to persevere and to continue to find joy in the simple gifts of sharing coffee with Karen in the morning, listening to the songs of the birds, enjoying a Red Sox game, or listening to his rock and roll.

Bob was predeceased by his parents, an infant brother, his father-in-law Richard Dorshimer, his fishing partners Ray, Jim and Carl. He has already been greeted by loved ones who have gone before him, including his beloved canine daughters Kinsey and Lily. Bob had one request in the recent months of his illness – that his family and friends would “remember me from time to time.”

Bob’s family would like to express their deep gratitude to Allen Chang, MD, Reliant Medical Center for his extraordinary care of Bob and his wise counsel during years of illness. Bob’s family also expresses their heartfelt gratitude to Matt Niemi, MD, UMass Memorial Medical Center for his compassionate care of Bob and enjoyment of Bob’s sense of humor.

Bob’s visitation and Memorial Service will be announced at a later date. The family invites you to wear a Favorite fishing shirt or favorite color to the events in celebration of Bob’s life. Chiampa Funeral Home of Shrewsbury is assisting with arrangements.

In lieu of flowers the family asks that memorials be directed to the Atlantic White Shark Conservancy, Box 66, Chatham, MA 02633 or the Fishing Academy at 16 Adair Road, Brighton, MA 02135, or a local animal shelter of your choice.