How can the Community Advocate help you promote your business?
Print Ads
Web Ads
Digital Marketing
Home Shrewsbury A piece of history in Shrewsbury is no more
Facebook
Twitter
Email 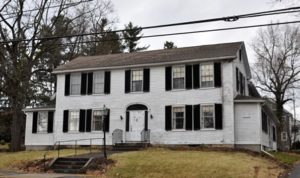 Shrewsbury – On March 31, a demolition crew took down a historic two-story colonial, located at 653 -657 Main St. It had most recently been known as the Howard C. Allen Funeral Home.

The home was originally the Thomas Walter 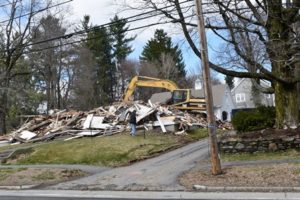 Ward house, having been built in 1803.  Ward was the son of General Artemas Ward. He was born in 1758 in Shrewsbury and fought in the American Revolutionary War.

Allen, a Shrewsbury native and WWII veteran, ran a funeral home at the site for at least 50 years.

According to Paul Schwab, chair of the Shrewsbury Historical Commission, the name now listed on the property deed is Timothy Jarry, who is Virzi’s son-in-law and a Shrewsbury resident.

Schwab shared in an email that he and other members of the Commission were willing to provide Jarry with contacts of Realtors who specialized in selling historic homes. He said that Jarry was not interested in pursuing any of those options.

The demolition permit was obtained in early March. Shrewsbury, unlike several other nearby towns, does not have a demolition delay bylaw.

Jarry was contacted by phone to comment on the demolition and plans for the property. There has been no response as of yet.

Part of Prospect Street in Shrewsbury to be closed this week