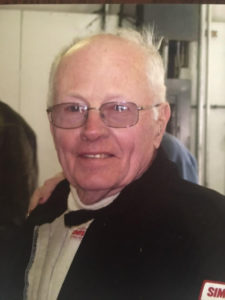 Marlborough – Daniel J. Curley, 84 of Marlborough, MA, passed away peacefully at home surrounded by his loving family on Wednesday, April 1, 2020, after a period of declining health. He is survived by his beloved wife of 60 years, Barbara Ann (Main) Curley.

Dan was born in Boston, MA on December 30, 1935, a son of the late William F. and Kathryn A. (Graham) Curley. He was raised in Wayland, where he graduated from Wayland High School in the class of 1953. He then enlisted in the United States Army, honorably serving his Nation in the Korean War.  He later went on to earn his associate degree from Newbury College. Dan had a long and successful career as a welder and metal fabricator, working from his garage as well as other companies. He and his wife settled in Marlborough after they were married where they have resided for the past 60 years.

Dan led an active lifestyle and enjoyed working on midget cars and Hot Rods. He was a member of Atlantic Coast Old Timers (ACOT) midget racing as well as TYRODS hot rod club. He was also a long-time member of the Disabled American Veterans of Waltham. Throughout his life he was an avid runner and participated in several marathons including the Boston Marathon and Marine Corps Marathon in Washington D.C.

In addition to his beloved wife, he was also survived by his 6 children, Cheryl A. Curley, Joanne M. Buckley, Michael D. Curley and his wife Anne, Patricia E. Colella, Kathryn A. Colacchio and Janet M. Bartolane and her husband Andrew; 4 siblings, William F. Curley, Marie K. Lelievre and her husband Dennis, Joseph R. Curley and his wife Dianne and Ellen M. Chaisson and her husband Robert; 13 grandchildren; 4 great-grandchildren and many nieces and nephews. He was also predeceased by his son Charles E. and his brother James M. Curley.

Due to the recent COVID 19 guidelines interment will be held privately at Evergreen Cemetery. A Memorial Mass will be celebrated at Saint Matthias Church in Marlborough at a later time. Tighe Hamilton Regional Funeral Home of Hudson is assisting with arrangements.