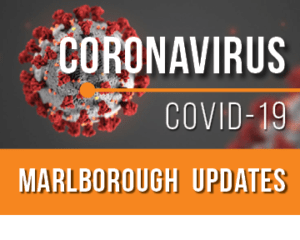 Marlborough – City officials warned residents of scammers, rolled out an online COVID-19 screening partnership and announced they were investigating the sudden death of a 58-year-old man for possible connections to the COVID-19 crisis April 1.

The flurry of news marked a tragic start to the month of April and came within hours of a weekend testing binge revealing Marlborough to be a hot-zone in the local COVID-19 crisis.

“This should be used as a somber reminder of the seriousness of the outbreak in our community,” Mayor Arthur Vigeant said at a press conference. “It is extremely important that we take every precaution necessary to limit the spread of this virus and to protect ourselves and those around us from illness.”

A man, officials say, died of “flu like symptoms” late March 31. While investigators cannot confirm whether the man actually passed due to COVID-19, they were still looking into the matter as of 4pm April 2 according to the mayor’s office.

“We would like to extend our deepest condolences to the family of the deceased,” Vigeant said earlier in his statements.

All this happens as the number of cases in Marlborough rises to 50. That’s according to the latest statement from the Marlborough Health Department, which also announced earlier this week that its partnered with the company Buoy Health to offer remote screenings to determine which locals should get tested for COVID-19.

As has been the case for several days and weeks, though, a bright spot in the COVID-19 crisis remains the wide-reaching meal delivery program the Marlborough Public Schools have implemented.

April 1 data from the district says pickup locations at schools and drop off spots along traditional bus routes have dispersed 26,000 meals. That’s a 6,000 meal increase from the 20,000 meals reportedly made just 24 hours earlier.

“[We] have received great feedback from the community on this program,” MPS director of finance and operations Doug Dias wrote via email March 31. “The feedback has helped keep spirits high for our foodservice employees as well as the North Reading Transportation staff operating the buses.”

Dias explained the system of converting their existing student transportation contract into a food one has served the multi-pronged purpose of keeping employees paid, getting food to local families and preventing mass gatherings around distribution spots.

It’s all possible, Dias said, because “our bus company had the drivers ready and willing to provide this service.”

As the COVID-19 crisis drags onward, Dias said the district is considering downsizing from distributing food five days a week, to only doing so on three days. Even if that happens, though, he said cafeteria staff will still make the same amount of food and will simply load busses with more of it to last families to the next drop off date.