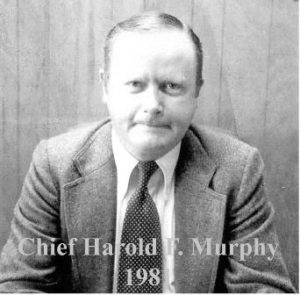 Region – Harold F. Murphy, Jr. passed away suddenly on March 31, 2020. He was a lifelong resident of Cambridge and spent the summers in Plymouth, Massachusetts.

Harold graduated from Rindge Technical High School in Cambridge, MA in 1956. He then served four years in the United States Marine Corp. Upon return from his service, he went on to receive a B.S. from Northeastern University and a M.Ed. from Boston University. He served for 37 years on the Cambridge Police Department, and retired as superintendent of police in 2002. He was the former police chief in Hudson, MA, serving in 1981. He was a proud member of the FBI National Academy, ASIS International and the Massachusetts Chiefs of Police Association.

He was a cherished grandfather to Sean Murphy of Mancos, CO, Kathryn and Paul Murphy of Double Oak, TX, Michael Ryan Murphy of Orlando, FL, Brendan and Braden Murphy of Natick, MA, and Christopher, Erin and Ryan Huban of Latham, NY.

He is survived by his brothers Henry Murphy of Reading, MA, James Murphy of Billerica, MA, Joseph Murphy of The Villages, FL, John Murphy of St. Lucie, FL, his sister Mary Murphy of Pembroke, GA, sister-in-law Carol Mullen and her husband Michael of Westlake Village, CA, and sisters-in-law Noreen and Nancy Sweeney of Malden, MA. He is lovingly survived by many nieces and nephews.

He is predeceased by his parents, Harold and Mary Murphy, and his wife Patricia (Sweeney).

Due to current situation, funeral services will be held at a later date.