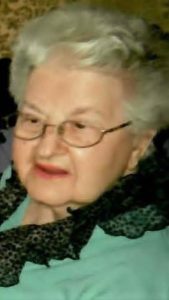 Hudson – Aurora (Petroni) Garbolevsky, 97, of Hudson, MA, passed away peacefully, on Friday, April 10, 2020 at Oak Knoll Healthcare in Framingham, MA, after a period of declining health. She is reunited in heaven with her beloved husband Alexander F. Garbolevsky, who predeceased her on March 30, 1998.

Aurora was born in Trenton, N.J., on September 3, 1922, a daughter of the late Saulle and Palmina (Panfili) Petroni. She was raised in Trenton and later moved to Newport, RI. After getting married, she and her husband settled in Hudson in 1947. She helped support her family as an assembly worker at Dennison and Design-Pak in Marlborough and Independent Cable in Hudson, before retiring. She was a longtime member of Saint Michael Parish and also the Ladies Auxiliary VFW Post 1027 in Hudson.

She is survived by her 2 sons, Alexander F. Garbolevsky and his wife Eugenia and Frederick M. Garbolevsky and his partner Linda French; her sister Ida Scardone of Langhorne, PA and many nieces and nephews. In addition to her husband, she was also predeceased by many brothers and sisters.

All services will be held privately at a later time. Aurora will be interred at Saint Michael Cemetery in Hudson, beside her late husband. Tighe Hamilton Regional Funeral Home is honored to be assisting with her arrangements.