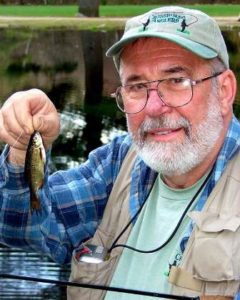 Marlborough – Armand Courchaine was born on March 18, 1944 in Fall River, MA, and he died peacefully at UMass-Memorial Marlborough Hospital on April 14, 2020 at the age of 76, after a tough battle with COVID-19. Armand was predeceased by his parents Leo J. Courchaine and Emily Boudreau, his first wife Theresa, and a long-time partner Celeste.

Armand was an unassuming, kind, and gentle man. He had a soft voice, a twinkle in his eye, and an easy smile. He always knew how to connect with people. He adored all his children and grandchildren and always welcomed everyone into his ever expanding family. He adopted friends as brothers and sisters. He used to say “You are my brother from a different mother,” and “I never had a sister, so I’m adopting you!”

Armand was a lifelong fly tyer, a fly fisherman, an amazing photographer, and a writer, and he loved sharing his many talents with everyone. He used to say to people, “You need only four things in your life. You need a job, family, faith, and a hobby. If one thing is missing it’s like driving down the road with a flat tire. You won’t get far.” Armand was blessed to have all of these things in his life.

Armand had a quiet upbringing. He was an only child, and both his parents were Deaf, and so he discovered the world on his own. At age 9 he was approached by Mr. Cornell at the E. F. Cornell Sporting Goods Store and asked if he would like to earn some money tying flies. This was the start of a lifetime passion for fly tying.

In 1963, Armand joined the Navy after telling the recruiter he had one condition: “I want you to guarantee me action.” Armand served on the USS Willis A. Lee during the Cuban Missile Crisis. While in the Navy, he was trained as an electrician, and he was the best, often remarking that he solved all of his electrical challenges while sleeping!

Armand was also an avid writer. From 1980 until 1996, Armand wrote a column called “Fishing Time” for Somerset Spectator. He also wrote articles for My Father’s Canoe, New England Fisherman, On the Water Magazine, and a fun, upbeat column called “Sunshine on My Shoulders,” for the North Attleborough Free Press. In November 2013, Armand completed his first book entitled “Bugs Over Bass,”—a book on tying bugs with deer body hair.

The sounds of nature and beautiful music always touched Armand’s soul, and he loved going to concerts. He also took great pleasure from volunteering. He was the resident expert in lamp repair and vacuums at Fresh Start Furniture Bank, an organization that helps people get a new start in life. And he found his spiritual home at St. Anselms Church in Sudbury where he was a greeter and a member of the Maintenance Group.

Armand met Sheila at a Parents without Partners Dance in 2001. In addition to sharing the same birthday of March 18th, they shared nearly two decades of deep friendship and love.

Armand cherished every birthday celebration, phone call, and gathering with family and friends. The Wayside Inn and Josephine’s Pond held a special place in his heart. He held yearly fly tying events there to teach people about this hobby and to honor his friend Doug Bugley who worked there for 30 years and died of brain cancer. They both loved this pond, and Armand kept the pond going, making sure it was stocked with trout so everyone could enjoy it. Armand touched so many lives.

Donations to honor Armand can be sent to a charity of your choice or to Marlborough Hospital; St Anselms Church in Sudbury, MA; Fresh Start Furniture Bank in Hudson, MA; or the Longfellow’s Wayside Inn in Sudbury, MA. All are invited to sign Armand’s online guestbook at www.CollinsFuneral.com.