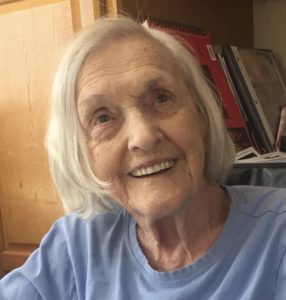 Holden – Gloria Kennedy was born November 2, 1928 in Boston. The daughter of Mabel and George Johnson, she was raised in Holden, Massachusetts. After having four children, she began college at Clark University, and went on to get her graduate degrees and practice psychology both for the state of Massachusetts and in private practice.

Always a free spirit, she and Jack traveled the country and the world, often spending time in their motorhome with three golden retrievers. She was a joyful, down to earth person, full of mischief and a passion for life. She knew every bird that visited her yard and took delight in finding the first mayflowers and lady slippers in the spring. She was a wonderful mother. We were so lucky to have her.

Her lively, smart and courageous spirit will always live in our hearts.

A private graveside gathering will be held at Pine Grove Cemetery in Westborough Massachusetts.