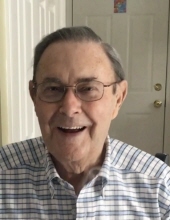 Shrewsbury – Richard H. “Dick” Lavigne, 88, passed away at UMass Memorial Medical Center on Saturday, May 2, after a period of declining health and a heroic battle with the Covid-19 virus. He was predeceased by his beautiful wife of 68 years, Virginia I. Lavigne, just 3 short months ago. They are holding hands once more.

Dick graduated from Boys Trade and joined the Carpenter’s Union. He became a superintendent for Granger Brothers Construction, and Cutler Associates, Inc., retiring in 1997. As a superintendent, he oversaw the completion of many Worcester area buildings: Anna Maria College, Clark University expansion, Worcester Police Station, and the expansion of UMass Memorial Hospital, to name a few. He was most proud of the two years he spent building the Sonesta Sanibel Harbor Resort in Fort Meyers, Florida.

He loved his Town of Shrewsbury, and served on the School Board, Town Meeting Member, Board of Appeals, Member of the Council on Aging, Lions Club, Auxiliary Police Officer, and campaigned for various political candidates.

An avid fisherman, Richard enjoyed both fresh and saltwater fishing, lobstering, crabbing, and clamming. Cape Cod holds treasured memories of beaches, sailing, boating, relaxing with family and friends, or simply sitting on a bench at the canal with his wife watching boats go by. Dick devoted his last several years to caring for his wife, who he lovingly referred to as his girlfriend. He was her nurse, chef, housekeeper, fashion consultant, and boyfriend. He is at her side once again.

The family would like to thank the doctors and nurses at UMass Hospital for their dedication during these horrific times. Details of Dick’s service will be announced by the family once the pandemic restrictions have been loosened. Please visit the Chiampa Funeral Home of Shrewsbury’s web site for updated information.