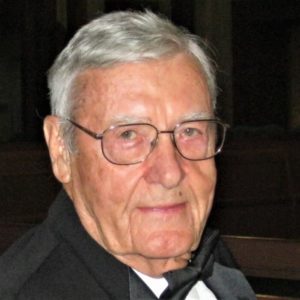 Westborough – Claud Myron Davis, 95, passed away May 5, 2020, at The Rose Monahan Hospice Home in Worcester, MA.   He was born on August 23, 1924, in Pine Valley Mississippi, the son of the late Claud Clifton Davis and Anna Kelly Davis.

Mr. Davis was a veteran of World War II having served in the Pacific as a radio mechanic in the Army Air Force.  He received a BA in Electrical Engineering from Oklahoma State University in 1950 and an MA in Applied Mathematics from Harvard University in 1961. His love of engineering contributed to a nearly 40 year career at IBM during which he received multiple patents and contributed to the design architecture of the System 360.  His proudest professional achievement was winning the Elmer A. Sperry award for his role as project leader on the conception, design and development of the first fault tolerant computer aided traffic control system for the FAA.  He was also awarded the IEEE Simon Ramo Medal and a Lifetime IEEE Fellowship for leadership in air traffic control systems.

His family will sorely miss his constant love, optimistic outlook, easy-going nature, thoughtful advice, and his ability to fix just about anything.

A private family service will be held at Pickering & Son Funeral Home in Westborough and a celebration of life will be planned for a future date.

In lieu of flowers, remembrances may be made to the First United Methodist Church Memorial Fund, 120 West Main St., Westborough, MA 01581