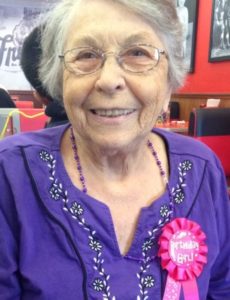 Westborough/Dennisport – Glenna E. Smith, 84, formerly of Westborough and Dennisport, passed away at the Royal Wayland Nursing and Rehabilitation Center in Wayland.  She was the wife of the late Clayton L. Smith.

Born in Worcester, she was the daughter of the late Stanley W.and Marian (Bethune) Eames.  She was raised and educated in Worcester and graduate of South High School.  She also earned a bachelor’s degree from Springfield College and a master’s degree from Framingham State.

Glenna was employed as a special needs teacher with the Marlborough School System.

She is survived by two children, Terrie L. Jones of Douglas and Jeffrey L. Smith and his wife, Gabby, of Northborough; three grandchildren, Amie Jones, Tyler Smith, Jessica Orlando and her husband, Matthew, and two great-children, Brady and Gemma Orlando. She was predeceased by a brother, Stanley W. Eames, Jr.

A graveside service in Pine Grove Cemetery will be planned at a later date.

In lieu of flowers, donations in her memory may be made to the Alzheimer’s Association, 309 Waverly Oaks Rd., Waltham, MA  02452 or at alz.org/MANH