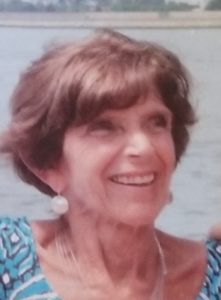 Warren, R.I. – Eleanor M. Fuller, 75, of Warren, RI died peacefully after a period of declining health on May 17, 2020, at the Hulitar Hospice Center, Providence, RI surrounded by her loving daughters and granddaughters. Eleanor grew up in Newton and attended Mount Alverina Academy. She continued her education at Emmanuel College in Boston and earned her Bachelor’s Degree From Regis College.

Beloved mother of Chrissy M. Pereira and her husband Jim of Somerset and Sue L. Marshall and her husband Jim of Warren, RI. Loving grandmother of Melissa and Lauren Soleimani. Sister of Paul F. Chiampa and his wife Joan of Pembroke and David M. Chiampa and his wife Mary Ann of Shrewsbury. Also survived by several nieces and nephews and great nieces and nephews.

A Mass honoring her life will be celebrated in St. Mary’s Church, 640 Main Street, Shrewsbury, will be private.

Relatives and friends are respectfully invited to attend visiting hours from 4 – 7 P.M. on Wednesday, May 20th at the Chiampa Funeral Home ~ The Sumner House, 5 Church Road, Shrewsbury Center. Interment will follow at Union Cemetery, Scituate. In lieu of flowers, we feel certain Eleanor would rather you do something kind for someone. That would make her smile. May her memory be a blessing.