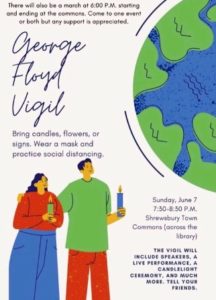 Shrewsbury – In the wake of George Floyd’s killing on May 25, activists have organized and participated in demonstrations across America and around the world in a show of solidarity with victims of police violence. This week, Shrewsbury High School’s Black History Committee has been working with other students to show their support and organize a demonstration in memory of Floyd that will take place in Shrewsbury on Sunday,  June 7.

“Meg Sullivan brought the idea up to Thalia [Vlahos] and I after attending a similar vigil in Northborough,” said Collin Lovelace, one of the students that worked with the Black History Committee to organize the demonstration. “We all, including BHC, immediately jumped onto the idea because we were all passionate about the cause.”

To the organizers of this demonstration, their cause is of the utmost importance.

“Amongst the mass amounts of fear, pain, and anguish, we’re hoping this vigil will bring everyone back to one common understanding: this, at its core, is a humanitarian issue,” said Katelyn Buckley, one of the organizers of the demonstration. “I’d like to think of it as a ‘peaceful remembrance,’ an event not to further any political agendas, but to mourn the tragic loss of George Floyd and, in doing so, stand in solidarity with Black lives.”

The march will meet at the Shrewsbury Town Common across the street from the Shrewsbury Public Library at 6 p.m.  It will begin there and loop back around to the meeting point. The vigil will begin at 7:30 p.m. and will include speakers, a live performance, and a candlelight ceremony. All ages are welcome and encouraged to attend.