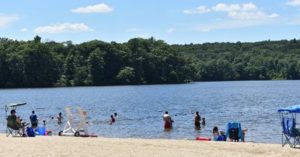 Westborough Recreation Director Jenn Kirkland reported at the June 2 Board of Selectmen meeting that the Recreation Commission had met and voted to cancel most playground and sports programs through the end of July.

The Recreation Commission also voted to close the beach at Lake Chauncy as well for the  summer.

“These decisions definitely weren’t made lightly,” Kirkland said. “The camp guidelines came out…many people were discouraged. It seems like they can’t even play kickball.”

She said there were so many layers of restrictions that it was difficult to figure out what the children can actually do at camp.

Kirkland said the plan is to offer as much as they can in terms of recreational activities that are typically individual sports anyway, like golf. The Recreation Commission plans to re-evaluate at the end of July to see if they can run some mini-programs in August. They may also consider a day program here or there instead of weekly programming. In the meantime, tennis and pickle ball courts are open, playgrounds are due to open in Phase III of the reopening plan, and trails and state parks are open.

“We understand people love the beach and it’s a resource, but don’t feel we can do it safely under the guidelines,” she said.

Restrictions would require more staffing for the beach, but the town would be able to sell less passes. She also cited the issue of re-education of the town in how the beach would operate, saying day passes wouldn’t be available and people would have to be turned away. Kirkland said she had been in touch with neighboring towns, and they are all shutting down their beaches as well.

The gates at the beach will be locked, and signs will be put up saying there are no lifeguards on duty and that the beach is closed. At this time, there are no plans to put up “no trespassing” signs.

“I think we have to be realistic and realize that people are going to be using the beach at their own risk,” BOS Vice Chair Shelby Marshall said. “We just have to do what we can to minimize liability.”