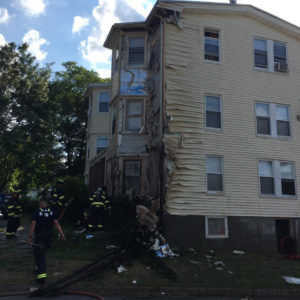 Marlborough – The Marlborough Fire Department was dispatched to a reported structure fire at 184 Mechanic Street at 5:03 p.m. on June 23. Engines 1, 2, 3, Tower 1 and Rescue 1 responded. The first due Engine reported smoke showing on their way, the box was struck for the fire shortly thereafter to the call. Off duty personnel responding on the callback staffed the Department’s reserve fire apparatus to ensure adequate coverage for the city.

The fire apparently started outside of the structure in some shrubbery and quickly extended up the vinyl siding. Fire personnel went in to make sure the building was evacuated and to check for any fire extension into the structure itself. The box was recalled at 6:48 p.m.

The residents who were displaced by the fire were put up at the Holiday Inn until their units can be cleaned and determined safe to return to.

According to Captain Rick Johannes, a member of the Marlborough Fire Department’s Fire Investigation Unit, the cause of the fire is under investigation and is undetermined at the time of this article’s submission. 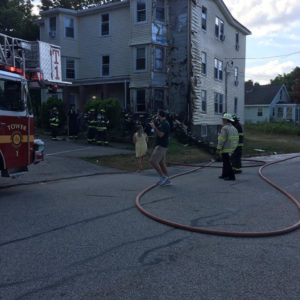