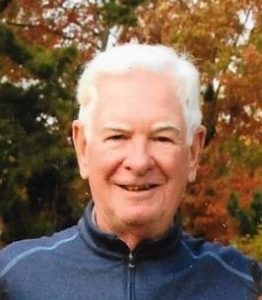 Born in Norwich and raised in Killingly, Michael was one of three children born to the late Edward E. Anderson, who was killed in action during Battle of the Bulge, and Mary (Delahunt) Anderson Boulais. Mary later remarried Lucian Boulais, who became Michael’s father in every sense of the word. He was a 1959 graduate of Killingly High School, and shortly thereafter enlisted in the U.S. Navy, serving proudly until his honorable discharge in 1963. It was that year during which Michael married the love of his life, the late Isabel, and the two would spend the next 47 years together, until her passing in 2010.

Michael retired from Pratt & Whitney Aircraft, where he dedicated over 32 years of his career as a Machinist.

He leaves behind his children, Karen Gordon and her husband Douglas, Stacey Dopilka and her husband Paul, and Mark Anderson and his wife Kristin; his grandchildren, Emily and Nathan Anderson, Paige and Margot Gordon, and Sophia and Olivia Dopilka; his sisters, Jane Aarnio and MaryLou Kenyon; and family friend, Howard Slater.

Memorial services will be held when we are all able to gather safely.

In lieu of flowers, memorial donations may be made to www.parkinsons.org.