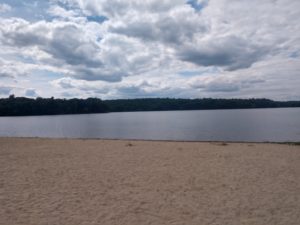 Westborough – Due to rising issues at Lake Chauncy Beach, the Board of Selectmen, Board of Health and Recreation Commission all met June 23 night to discuss how the beach should be handled.

Recreation Director Jenn Kirkland said her commission had met May 26 and officially decided to close the beach for the season due to overwhelming state guidelines and restrictions.

Kirkland said the commission had several things to consider in opening the beach.

She said that in the past there was never a cap on the number of passes sold, but now the commission felt the safe number of passes to sell were about 40, with up to six people on a pass. It was also decided no passes would be sold to anyone that is not a town resident. She said the prices would need to increase due to the lower number, and that due to restrictions, there would need to be more staff hired to enforce social distancing and adhere to strict guidance regarding cleanliness. She pointed out that the staff consists of high school and college students, and the commission felt that turning frustrated people away daily would stressful for a young staff.

“When you peeled back the layers, it was going to be an incredible undertaking we didn’t want to put on younger kids,” Kirkland said.

Another issue was that the beach usually loses $8,000 to $10,000 in a normally-operated summer. Kirkland projected the beach stood to lose almost $39,000 this summer if they opened, because even with the increase in price, the lower number of passes puts the beach in the negative. Add to that extra staff to be paid, no swim lessons being held, and no programs on or around the beach, and the number climbs.

“The money is a big deal for us,” Recreation Commission Chair Earl Story said. “To take another big hit is a big thing.”

Kirkland reported that at their regular meeting last night, the commission discussed the beach again and felt that not much has changed as far as regulations, so voted again to keep the beach closed.

However, just because the beach is closed, doesn’t mean people aren’t using it. Kirkland pointed to an abundance of trash in the parking lot and on the beach, including alcohol cans. She said the bathrooms are closed, but people managed to get in and still use the facilities even though water had been shut off, resulting in quite a mess.

“It’s been unfortunate,” she said.

Selectman Ian Johnson said his first reaction was he couldn’t believe the town was closing the beach.

“But when I looked at the restrictions and what the Recreation Commission said, unfortunately it makes sense,” he said. “While I would love to see it open up, I feel we are opening ourselves up to a huge can of worms.”

“I think we need to do more,” she said. “I feel like we have to have some mechanism to say, ‘get out.’ We need to think about how do we keep it safe closed.”

She also said opening it up seems less and less practical as the summer goes on. Board of Selectman Chair Shelby Marshall agreed, and asked Kirkland if it was even possible to hire lifeguards at this point. Kirkland said she had reached out to her guards, and had gotten only one response back.

Board of Health member Alan Erlich said the concern he has is that keeping the beach closed is an equity issue; he pointed out lots of people have access to a pool, or summer house. Others need to use the beach to cool off.

“What is it worth to make a service like the beach available to the town,” he asked.

Storey said people were making too big of deal out of beach when considering all people have faced including sicknesses, unusual funerals, postponed weddings, and other the stressors the pandemic brings.

“We are trying to return a thing of normalcy for people who have already sacrificed a lot,” he said.

Emery said the main issue to her is if they are being equitable in the resources they are giving the community.

“This is the place in Westborough that is relatively free and affordable to swim in, and I think it’s our moral duty to look at this as a moral issue,” she said. “If we spend the money, I think it would be very well spent, and I think the people who are going there are not getting relief from other things. If we don’t monitor that beach, I’m terribly worried there will be a death in that pond this year and it will be our problem.”

Town Manager Kristi Williams said the state guidelines are clear.
“If we are going to open the beach, we need to manage it under the state’s guidelines,” she said “We can’t partially manage the beach.”

Board of Health Chair Nathan Walsh said due to frequent issues at the beach, the town might have to consider harsher ways of keeping people off the beach if it is going to stay closed. He said at other town beaches, they use jersey barriers to block off most of the parking places; Earl said people would just find other nearby places to park.

“An unmanaged beach we know people are actively going to is worse than a managed beach,” Walsh said. “Having the beach closed, and knowingly allowing people to going there, is a bigger health risk. I think it is safer to have the beach open than have it not open.”

Erlich said Marlborough is opening their beach and has a police detail to deal with entry, passes, and social distancing.

“That makes it very expensive, but it also sets a very different tone for people going to the beach,” he said.

Public Health Director Steven Baccari said people have been calling and asking if the water is being tested. It currently is not, but said it could be easily set up. He also pointed out he’s only shut the beach down once or twice in his 23 years due to bacteria.

Dowd pointed out the testing is done in a very small area, but people are using all different sections of the lake. She said testing also sends mixed messages.
“So you’re closed, but you’re testing,” she asked. “And people were in the water yesterday even though there was a sign saying it had been treated for weeds.”

Selectman Vice Chair Allen Edinberg wondered if local pools would work with the town to issue guest passes. Baccarri said pools already have limited capacity due to regulations as it is.

Thea boards agreed to stand behind the Recreation Commission’s decision, and support testing of the water.