On May 27, nearly 70 cars gathered at WHS for a joyful parade that swung by Breeze and Potosnak’s Westborough homes. 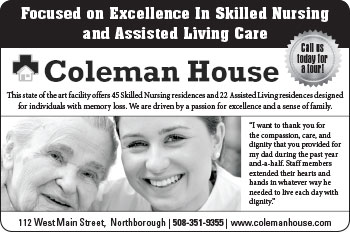 Forbes had organized the parade to honor the two teachers who she said were “just amazing professionals who had done so much for so many students.”

As she helped to organize the parade that day, she was touched to see signs on several cars that she did not expect.

On those notes were messages directed to her, offering thanks and congratulations on her retirement.

Forbes was surprised but grateful, she said.

“I had planned this for Anita and Darrell,” she said. “I definitely did not expect this to be for me too! It was so nice.”

Forbes has been an administrative assistant for 27 years. She noted that she is not sure what will be next for her now that she is retiring.

“I am looking forward to some new adventures, but it’s still all up in the air,” she said. “I have five grandchildren so it will be fun to spend time with them.”

Potosnak, a computer science teacher as well as the Business Team chair, has taught at the school for 27 years.

“I have loved everything about working at the school – the students and faculty are the best,” she said.

“It’s always fun to see them out and about,” she said of her students. “And I actually had some of their parents as students, too – that’s fun!”

Potosnak said she was proud of all of her students but had a special affection for those who started off unsure but saw themselves grow and become more confident in their abilities.

“It’s amazing to see kids learn to believe in themselves,” she added. “And I always emphasize that you don’t have to have it all figured out now – you have your whole life ahead of you.”

For the last few years, Potosnak has also served as a chaperone on several student trips to different parts of Europe,

“I really wanted to do more traveling once I retired,” she said. “I hope that once things calm down, I will be able to do that again.”

For Anita Breeze, who is retiring after just over 25 years, retirement is a mixed blessing, she said. A severe special education needs teacher, she worked with students who needed academic support, and working with them on executive function, self-advocacy and independent skills.

“I have loved the kids,” she said. “It’s been great to see them ‘grow and glow’ as they become strong self-advocates.”

“And there are such great people here at the school. I will miss my phenomenal colleagues and I love the administration. It’s the best place to work.”

Breeze noted that she will still be involved with the school, serving as a substitute teacher. Recently she and her husband Bob celebrated their 47th wedding anniversary. Bob runs a small personal fitness business which helps the couple stay energetic and in shape, Breeze said, adding that she is looking forward to spending more time with her six grandchildren, who range in age 14 months to eight years.