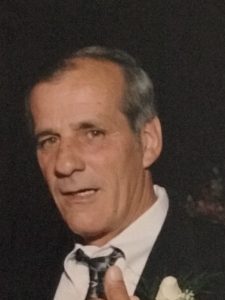 Marlborough/Hudson – Paul R. “Bob” Tebo, 77, died Tuesday July 14, 2020 after a short period of failing health. He was the husband of Millie (Barry) Tebo, to whom he was married for 28 years.

He was born  in Worcester, the son of the late Donald Tebo and the late Rita Kaloustian and the stepson of Linda Tebo Northborough of and lived in Marlborough, Hudson, Clinton and Berlin all of his life.

Besides his wife and step mother he is survived by two daughters; Donna Tebo of Baldwinville, Cheri McCulley of Shrewsbury, two stepsons; Daniel Hogan of Phoenix AZ and Christopher Hogan and his wife Kim of Southbridge, one brother Herby Tebo and his wife Jeanne of E. Douglas, one sister Penni Barger and her husband John of Ripon CA, three stepsisters; Jeanne Shrum, Ruth Depree and her husband John, Sandra Beane and her husband Larry, six granddaughters, six grandsons, eight great grandchildren and many nieces and nephews. He was predeceased by two brothers Donald and Richard, one sister Jacquelyn and two stepsisters Marie and Susan.

Private family funeral arrangements are being planned and a public celebration of life will be held in the future.

Donations in Bob’s memory can  be made to the Hudson Food Pantry Inc, 28 Houghton St. Hudson MA 01749.