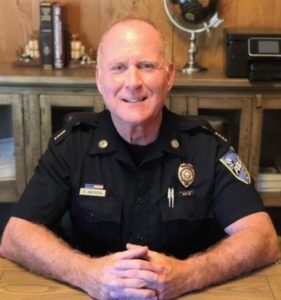 Shrewsbury – On July 20, the day that Police Chief Kevin Anderson was sworn in and supposed to officially be settling in to his new position; instead, he was dealing with the news that he had tested positive for COVID-19.

“It is certainly unfortunate…if we do all the right things there are still opportunities that we can somehow get infected,” remarked Town Manager Kevin Mizikar by phone. “No one is immune.”

Anderson had been serving as interim police chief since July 1 after the retirement of former Chief James Hester. The announcement of Anderson succeeding Hester was made by Mizikar at the July 15 Board of Selectmen meeting.

Mizikar said that on July 20 Anderson’s contract and paperwork had been finalized and he was sworn in outside of Town Hall. Anderson’s exposure to others in his department had been minimized because he was out of the office late last week. He will now be out of the office for at least another week.

In a press statement from Shrewsbury Police, Anderson said, “Despite not having any symptoms and feeling completely normal, yesterday, July 20, 2020 I tested positive for the novel coronavirus. I have not been in the office working since the end of the day July 15, 2020. Public Buildings has since sanitized the building and sprayed with electrostatic disinfectant.

“This is a great reminder for us all that it is prudent to continue to take all due precautions in the line of duty and outside of work to protect ourselves, our families and the community. The Public Health Department has advised that I will remain out of work for the duration of this week and get retested Monday July 27, 2020. I will remain available via email and cellphone during this period. “

“The plan, in consulting with public health, is as a first responder he will be tested again in another week and if it is negative he will be able to return to work,” remarked Mizikar.

Anderson’s entire team has been notified and will be tested on an as needed basis.

The 26-year veteran of the Shrewsbury Police Department Anderson most recently held the position of Detective Lieutenant and Detective Bureau Commanding Officer.

“The overall precaution is that everyone needs to be diligent,” Mizikar noted. “This is a good opportunity to remind folks that the virus hasn’t left us yet.”