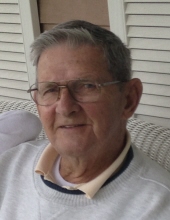 Shrewsbury – John R. Rielly, 86 of Shrewsbury, passed away peacefully at home on Wednesday, July 22, 2020. John adored his beloved wife Wendy (Vasco) Rielly, who he had celebrated 65 years of marriage with in December.

John leaves behind two children, John Scott Rielly of Milford and David A. Rielly of Upton; 5 grandchildren, 3 great-grandchildren, and his beloved sister, Joni Dunnells of South Carolina. He is predeceased by his parents, John J. Rielly (92) and Dorothy M. (Jones) Rielly (86).

After leaving the U.S. Navy, John and Wendy settled in Natick, where they raised Scott and David. John joined the U.S. Postal Service, where he worked at the main office in downtown Natick for 30 years and retired as the Superintendent, Postal Operations. John was very well known by all the residents of Natick and loved by all.

Besides collecting stamps, fishing and target shooting, John was actively involved in the South Natick Rifle Club, Natick Little League and Natick Pop Warner Football. He was an avid Patriots and Red Sox fan, who enjoyed attending games and watching them on television as well. John also enjoyed watching his boys practice and attending both home and away games.

In 1997, John and Wendy returned to Cape Cod and they settled in Mashpee. He loved salt water fishing and would be fishing daily at the canal, on a boat, or at the Mashpee beach. John and his longtime friend/fishing mate, Robert S. Munroe (Bob), also of Natick, would often be at Captain Al’s dock in Buzzards Bay preparing for a day fishing on Bob’s boat. John and Wendy enjoyed spending time at Seafood Sam’s in Sandwich, eating dinner while watching the boats in the canal. They spent the winters together in Englewood, Florida, where they enjoyed the warm weather, cookouts, watching the sunsets and being with friends.

In early 2017, John and Wendy moved to Shrewsbury, which allowed them to be closer to the immediate family. They both enjoyed being very close to the family, which allowed everyone to enjoy holidays, birthdays and gatherings together.

We are confident that John (First Mate) and Bob (Captain) are now back together again enjoying themselves on the water, reels in hand.

Scott and David would like the thank the staff at The Residence of Orchard Grove in Shrewsbury for their dedication to John and Wendy over the years. A special thanks to Brenda Rojas, Senior Director of Memory Care.

In lieu of flowers, expressions of sympathy in John’s name may be made to the Military Veterans Association, 59 South Street, Shrewsbury, MA.

A graveside service was held July 27 at the Massachusetts National Cemetery in Bourne. Chiampa Funeral Home of Shrewsbury assisted with arrangements.