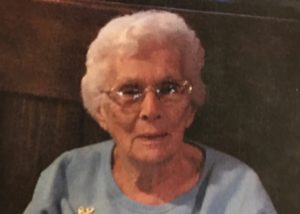 Lucile married the love of her life Charles “Chuck” Digou on September 3, 1950, and with him brought 9 children into the world. Besides caring for her children, Lucile also was a waitress for many years at the Oxford Restaurant and then the Marlborough Country Club. Upon retiring Chuck and Lu purchased and ran “Chuck’s Wagon” Diner on Lincoln St. in Marlborough for many years. After Chuck’s passing Lu ran “The Diner” with the help of some of her children.

Lucile is survived by her children, son Charles and his friend Sharon Collari, daughter Cynthia Madden and her husband Brian, son David, daughter Diane Ogar and her husband William, daughter Carol Krager and her husband Carl, son Dennis and his longtime friend Kim Garcia, daughter Marlborough Police Officer Catherine Digou and her fiancé William Orr and son Christopher and his wife Karen, and her “only adopted son” Paul “Polock” Polewacyk.

Lucile had many joys in her life, including playing cards, board games, bowling, making jigsaw puzzles, crosswords, knitting, but especially Bingo with all her Bingo Buddies.

The family would like to extend their gratitude for the extraordinary care provided to her by everyone at Christopher Heights Assisted Living Facility in Marlborough which was home for the last 6 years, also to all the Staff on Granger 2 (especially Nurse Karen Buckley) at Marlborough Hospital and Hospice.