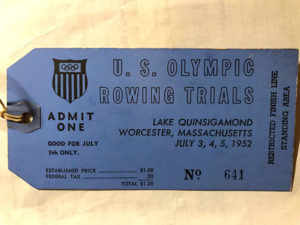 Shrewsbury – Almost 70 years ago, in early July 1952, Lake Quinsigamond was host to the
U. S. Olympic Rowing Trials.  This accomplishment was as a direct result of none other than Kenneth “Ken” Burns, who spearheaded the drive to bring the trials here, beating out Philadelphia, Penn., Princeton, N.J., Syracuse, N.Y. and Los Angeles, Calif.

Some of the events he was successful in bringing here included the Middle States Regatta in 1950 and the National Regatta in 1951.  The lake itself was home to crew racing events starting in 1859, with an ongoing rivalry between Harvard and Yale.  The sport continues on the lake even to the present day.  Burns himself was posthumously honored with the new Lake Quinsigamond Route 9 bridge being named in his honor.

Our photograph shows an original admission ticket for the 1952 Olympic Trials, good for admission to the “Restricted Finish Line Standing Area.”